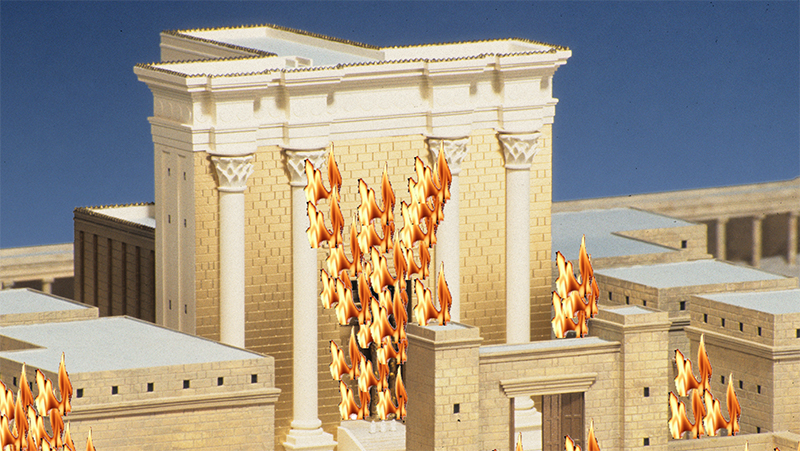 Josephus Flavius, also known as Yosef Ben Matityahu, was an eye-witness to the siege of Jerusalem. He somehow survived the siege of Yotvat in Galilee and with one of his soldiers surrendered to the Roman forces in July 67 CE. The Roman forces were led by Flavius Vespasian and his son Titus, both subsequently Roman emperors. Two years later, Josephus was released (cf. War IV.622-629) and according to his own account, he appears to have played a role as a negotiator with the defenders during the Siege of Jerusalem in 70 CE. The works of Josephus provide crucial information about this First Jewish-Roman War. Here, we would like specially to examine his account of the Roman destruction of the Temple Mount in Jerusalem.

Josephus and the Mishnah, especially the book of Middot (Measurements) were the main historical sources we consulted. Initially, we read Josephus with some skepticism, as we found his measurements prone to exaggeration and his text not always easy to understand. However, after having worked out the layout of the Temple Mount, we could begin to visualize the events he described with the latter as a backdrop. We found his account of the siege of Jerusalem to be quite reliable, apart from his personal comments on the character and actions of Titus and others, especially when they conflict with other historical sources.

The Roman destruction of the Herodian Temple Mount was a tragedy that is still mourned today. Nevertheless, Josephus’ report about the battle for the Temple Mount, despite its many gruesome details, provides us with many helpful indications about the layout of the Sanctuary and its buildings, courts, porticoes and gates.

Seven different stages of this war can be observed which confirm the layout of the Temple Mount.

3. Construction of a road into the Herodian Outer Court

4. Capture of the square Temple Mount

5. Capture of the Court of the Women

6. Capture of the Temple Court

7. The Destruction of the Temple

To make this information available, we have produced a new presentation consisting of 50 slides which follow these seven different stages of this battle.