A Brief Visual History of the Sacred Mount 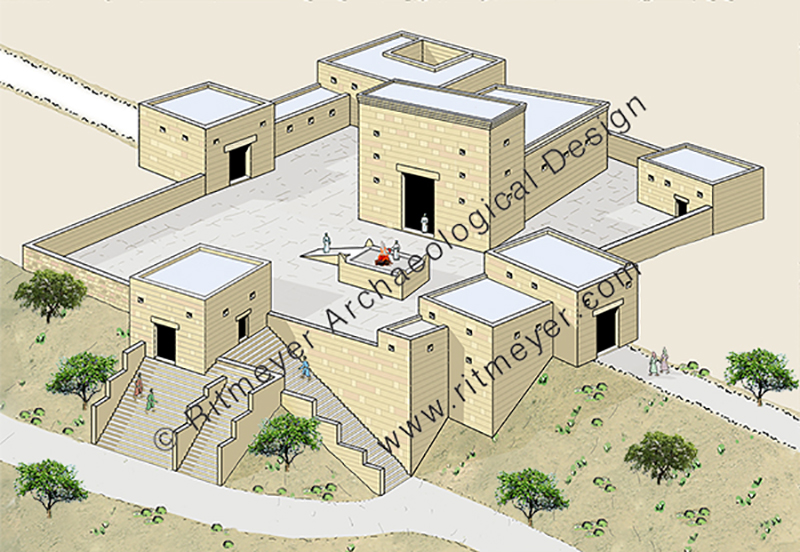 In the 1980’s, I used to visit Mount Gerizim as part of my work making reconstruction drawings for the Staff Officer of the Civil Administration of Judea and Samaria. These drawings showed what the different buildings from the area, dating from the Hellenistic, Roman and Byzantine periods, would have looked like.

Archaeological remains of a Samaritan sacred precinct were discovered in these excavations around the turn of the 21st century. These date from the time of Nehemiah (mid-fifth century BCE). The Bible doesn’t mention any temple as standing on Mount Gerizim, so we wondered how such a building fitted in with the biblical history. It was the reading of Josephus that provided the missing historical information, as we will see later on.

After the return from Babylonian Exile, a new temple was built in Jerusalem under the leadership of Jeshua and Zerubbabel. This temple is described in Ezra 6:3 as being 60 cubits high and wide. Although the stone work was inferior, it nevertheless functioned as a proper temple.

In the time of Nehemiah, the square precinct of the Temple Mount, previously built by King Hezekiah, was restored.

During that time, Sanballat the Horonite was the leading figure among those who opposed the building of Jerusalem and the temple. It is generally believed that he was descended from the Babylonian settlers whom the Assyrians deported to Samaria (2 Kings 17:24). Sanballat, whose name means “Sin (the moon god) gives life”, was the governor of Samaria. During the absence of Nehemiah, a grandson of Eliashib the high priest named Manasseh, had become the son-in-law of Sanballat (Neh. 13:28). On his return, Nehemiah rejected Manasseh and sent him away. The vital additional information for our question was found in Josephus, who records that Sanballat then offered to make Manasseh high priest and build a new temple on Mount Gerizim similar to that in Jerusalem (Ant. 11:310).

The archaeological remains of the Samaritan sacred precinct indeed indicate that at this time a rival temple was built on this mountain by the Samaritans. A closed courtyard, that could be entered through three gates, was built around the Temple. No remains of a temple have been found, as, due to hostilities between the Jews and Samaritans, the temple and sacred precinct were destroyed in 128 BC by the Hasmonean ruler John Hyrcanus I. However, archaeological finds of inscriptions, finely cut ashlars and proto-Ionic capitals attest to the existence of a Samaritan temple.

The site remained unoccupied until the Byzantine period, but despite this, Mount Gerizim remained a sacred place for the Samaritans. That is why the woman of Samaria said to Jesus that her fathers worshiped on this mountain, while the Jews worshiped in Jerusalem. Jesus answered that God must be worshiped, not in a sacred space such as Mount Gerizim or Jerusalem, but in spirit and truth (John 4:20-24).

According to Samaritan sources, a temple of Zeus was built on the northern ridge of Mount Gerizim after the Roman destruction of 70CE. This temple, which was built in the mid-second century, stood on a podium measuring 64m long and 44m wide.

Coins from about 160CE depict a temple that overlooked the city of Neapolis (modern Shechem or Nablus), and that was reached from the city by a stairway of about 1500 steps. This temple continued in use until the fourth century.

After that time, a large Byzantine complex surrounded by walls and towers was built on the highest summit of Mount Gerizim.

In the center of this walled complex stood an octagonal church, the Church of Mary Mother of God (Theotokos – literally God-bearer), which was established by Emperor Zenon in 484CE. Centrally designed churches are built to commemorate certain events, in this case, the Orthodox belief in Mary’s bodily resurrection before being taken up into heaven.

Mount Gerizim has been a sacred place for almost 2,500 years, and continues as such up to the present time. A large population of Samaritans lives on or near Mount Gerizim today and every year they celebrate the feast of Passover, with many pilgrims joining them. In this picture we see a priest holding up the Samaritan Pentateuch.