the domus ecclesia from the first to the fourth century 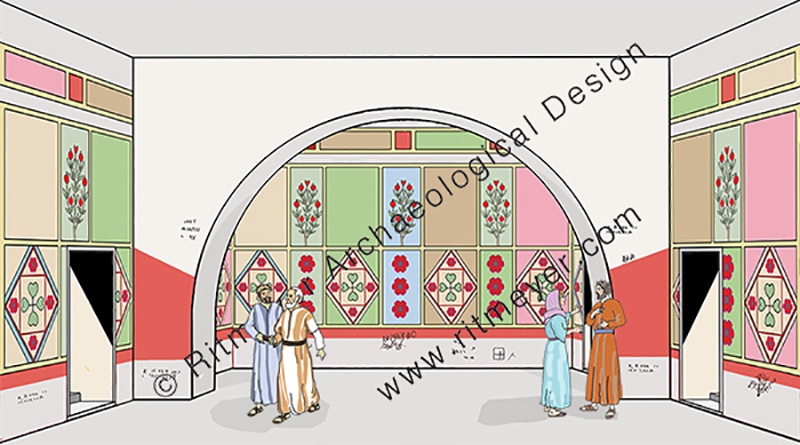 In our previous post we wrote that the House of Peter eventually developed into a church. It was a slow process that took four centuries. The first stage began in the second half, or perhaps even at the end of the first half of the first century, when the east courtyard transformed into a large room. While before the sky was its ceiling, this large space, measuring 5.80 by 6.45 m (21 by 19 feet) was now roofed over.  A central wooden beam placed on top of the walls divided the ceiling into two parts so that shorter beams could be used to span the large room.

Several layers of plaster were found on the walls and the floor. Quite unusually, this is the only room in Capernaum that was plastered at this time, pointing to the use for non-domestic purposes. There was also a change in pottery. Beneath the plastered floor, the usual repertoire of domestic vessels, such as cooking pots, bowls and juglets, was found. Above the plastered floor, however, only storage jars and oil lamps were discovered.

Who worshiped in this sacred space? After Pentecost, the early Christian believers “devoted themselves to the apostles’ teaching and the fellowship, to the breaking of bread and the prayers” (Acts 2:42), and according to Acts 2:46, this was done “in their homes”, or “from house to house”. The archaeological evidence points to the use of this plastered room in Capernaum as a large house-church or domus ecclesia. This space is sometimes referred to as the ‘venerated room’.

Until the 4th century, the population of Capernaum was entirely Jewish, and the Synagogue of Capernaum continued to operate as normal. The people that worshiped in the domus ecclesia were Jewish converts to Christianity, called minim by the rabbis:

“In passages referring to the Christian period, minim usually indicates the Judæo-Christians, the Gnostics, and the Nazarenes, who often conversed with the Rabbis on the unity of God, creation, resurrection, and similar subjects (comp. Sanh. 39b). In some passages, indeed, it is used even for “Christian”; but it is possible that in such cases it is a substitution for the word “Noẓeri,” which was the usual term for “Christian.”

In the late fourth century, at the initiative of Count Joseph of Tiberias, who was a friend of Constantine the Great, major changes took place in the development of Peter’s House. An approx. 120m long enclosure wall was built around Peter’s House, turning it into an almost square sacred compound, or insula sacra. Some of the first century rooms were destroyed to create more space around the domus ecclesia, giving the whole complex a stronger religious character.

There were two entrances in this enclosure wall, one in the north and one in the south. Interestingly, no entrance was made in the east wall to the Cardo street, the main north-south road on which the synagogue was located. Instead, a new east-west street (decumanus) was constructed north of the complex. Is this an indication that the two communities, Jewish and converts to Christianity, tried to remain separate?

The domus ecclesia room was also changed. A central arch was built in the room to support a higher ceiling, and the walls of this room were decorated with fresco. Various colours, such as red, pink, yellow, brown, green and white were used to create rectangular panels with alternating geometric and floral designs.

In line with Jewish practice, no human or animal forms were portrayed. Inscriptions, or rather graffiti, in Greek, Latin, Syriac and Aramaic were scratched in the walls by apparently Christian pilgrims. Some of these graffiti mention monograms of Jesus and of Christ. The name of Peter is one of the many inscriptions scratched on the walls.

On the northern side of the domus ecclesia, a sacristy was built where were usually sacred vessels and vestments were kept. On the east side an atrium was added which served as an entrance hall to the main room. This shows that in the fourth century the Jewish Christian population had increased substantially but were still living side by side with the Jewish people of Capernaum. All this was going to change in the fifth century when there was a huge influx of Gentile Christians …