from the domus ecclesia to memorial church 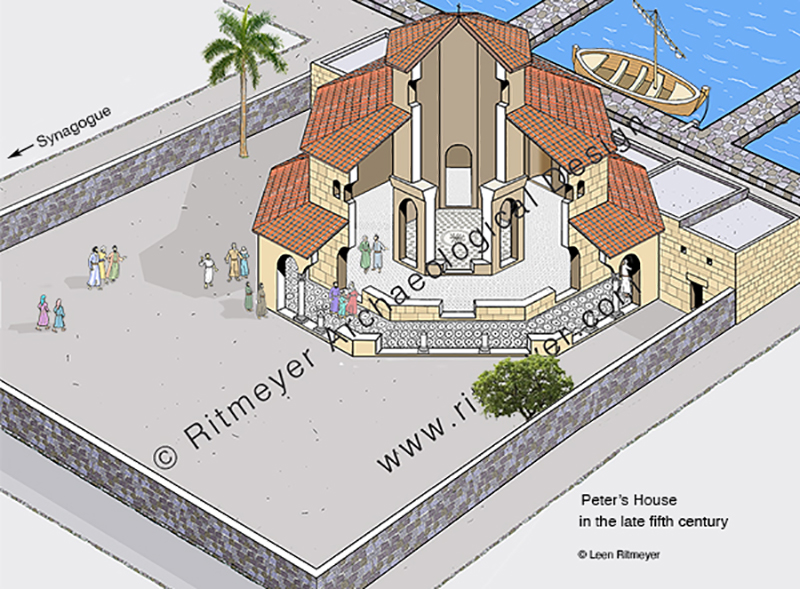 During the reign of Constantine the Great (306-337) and especially after his conversion in 312, Christianity spread rapidly in the Byzantine Empire and even more so in the Holy Land. After the visit in 326 AD by Queen Helena, Constantine’s mother, many Gentile pilgrims came to visit the Holy Land. Some remained and chose to live lives of seclusion in remote areas such as Sinai, around the Sea of Galilee, in the Judean Desert, and in Samaria, while others lived in towns and cities.

In the wake of this influx of pilgrims from the Byzantine Empire, the prominence of the domus ecclesia diminished and larger buildings became necessary to accommodate the many worshipers. Church buildings came into the ascendency, and their construction became the primary architectural focus during the later Byzantine period. Two kinds of churches developed: the basilica with its long hall, and the centrally designed (circular, octagonal, or hexagonal) memorial church. Basilicas were mainly used for communal worship, while the centrally designed churches commemorated special Biblical places or events.

During this time, the Gentile Christian population of Capernaum had increased dramatically and outnumbered the Jewish Christian members of the congregation. Radical changes were made to create a new Byzantine-style church inside the fourth century enclosure wall.

Substantial remains of the foundations of an octagonal church, that dated to the fifth century and was built with limestone blocks, were excavated in Capernaum. This limestone that came from the Arbel region could be carved easily and polished to a high degree. In the first half of the fifth century, the buildings that stood inside the enclosure were demolished and covered over. Instead of the domus ecclesia with its explosion of colour of the fourth century, a new and monumental was built in its place.

The walls of the inner octagon, which measured 7.9 m (26 feet) across, were built on the basalt foundations of the domus ecclesia and then another octagon, measuring 16.53 m (54.2 feet) across was added around it to complete the first phase of the new church. The church was paved with mosaics. The centre of the inner mosaic has a medallion with a peacock design, apparently symbolising immortality to the early Christians. Annexes were built to the west of the church and in the northeast and southeast corners of the square enclosure.

Sometime in the second half of the fifth century, a partial octagonal porch was added on the north, west and south, and an apse containing a baptistry on the east. This apse was constructed on the other side of the east wall of the enclosure.

The baptistry had steps leading down to it, indicating that adult baptism by immersion was practised in the fifth century.

After the Islamic invasion of 638 AD, Capernaum was abandoned and the church and synagogue, that had existed side by side, fell into ruin. After the earthquake that hit Galilee in 749 AD, Arab inhabitants began to systematically rob the buildings of their stones, leaving precious little for future archaeologists to investigate.

In 1866, Captain Charles Wilson exposed some foundations of the synagogue, with the unfortunate consequence that local people began to dig deep into the ground near the synagogue and near the church to find more limestone blocks which they either sold as building material or burned into lime. Other contractors used the exposed ruins as a quarry.

To stop this looting the Franciscan Custody of the Holy Land acquired the site in 1894 and exploratory excavations were conducted in 1905 by Heinrich Kohl and Carl Watzinger. Other excavations were conduction under leadership of F. V. Hinterkeuser and these continued until the outbreak of World war I, After the war, excavations were resumed by Gaudenzio Orfali until 1921. Orfali initiated the restoration of the Byzantine synagogue in 1922-1925.

In 1968, Virgilio Corbo and Stanislao Loffreda continued excavating Capernaum and conducted eighteen campaigns until 1985, and the restoration of the synagogue was continued by Corbo since 1969. It would have been great if similar efforts would have been put in the restoration of the Byzantine church, but unfortunately that won’t happen unless that new and incongruous UFO-like modern church that was built over Peter’s House (designed by the Italian architect Ildo Avetta and dedicated in 1990) would start its engines and fly off!

Nevertheless, it is thanks to the labours of the Franciscan Custody of the Holy Land that tourists and pilgrims can visit Capernaum again and see the place that was made famous when Jesus chose it as his hometown.