What was so beautiful about it? 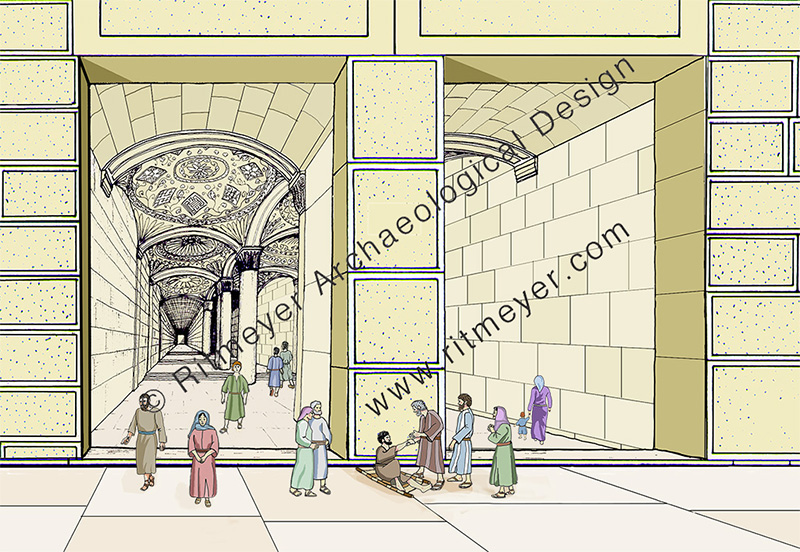 The New Testament (Acts 3.2,10) records a notable miracle that was performed at the Beautiful Gate of the Temple. This was the gate where a man who had been lame from birth was begging. When Peter and John saw him, they told him that they did not possess any gold or silver or worldly riches. Instead, they healed him in the name of Jesus Christ of Nazareth.  He then “went with them into the temple courts, walking and jumping, and praising God” (Acts 3.8). What a joyful occasion that must have been and one that was witnessed by many people. Jesus had healed blind and lame people before (Matthew 21.14), but now his disciples could perform similar miracles.

The time at which the miracle was performed was very significant. It was the ninth hour – the hour of prayer during which the evening sacrifice was offered in the Temple (Exodus 29.41).

David had composed a special psalm for this hour (Psalm 141.2). Jesus died on the cross at that very same hour (Matthew 27:46). Elijah’s sacrifice was also offered at the time of the evening sacrifice (1 Kings 18.29). At this time also, the angel Gabriel was sent to Daniel to answer his prayer (Daniel 9.21). The angel that came to Cornelius came at this time (Acts 10.3). God answers faithful prayers, but there appears to be a special time at which certain prayers are answered.

The miracle took place at the Beautiful Gate, but the question is, which gate is the Scripture referring to and how can it be identified? There were at least seven gates in the outer walls of Herod’s Temple Mount, but only in one of these gates have decorations been found.

In a previous post we wrote that some scholars have proposed that the Nicanor Gate or the Shushan Gate were the best candidates for the Beautiful Gate. However, we have argued that neither of these gates would have been suitable places for a lame man to beg.

A more likely location would have been the Double Gate in the Southern Wall of the Temple Mount, which I have described in my book The Quest, Revealing the Temple Mount in Jerusalem, 67-74.

The ceiling inside the double passageway has beautifully carved domes, which have survived up to today. In 1973, I received permission from the Muslim authorities to survey these domes. At the time, scaffolding was erected beneath the southwest dome, so that we could touch and measure it. That was an unforgettable experience. The domes were photographed under my direction, and I planned and set up the drawings, which were completed in pencil by Nili Cohen and in ink by my late sister Martha.

Most of the worshipers went up to the Temple Courts through this gate, which was certainly worthy of the appellation “beautiful”. It also allowed for effective begging practices, as suggested on p. 74 of the above-mentioned book. According to Mishnah Middot 2.2, “whosoever it was that entered the Temple Mount came in on the right and went round and came out on the left, save any whom aught befell, for he went round to the left.”

Two of the west domes are beautifully decorated with carved floral and geometric designs interwoven in intricate patterns.

We had suggested (The Quest, p.74) that these two eastern domes may have fallen during the original construction or because of an earthquake. They were rebuilt during the same Herodian period but were left undecorated.

Nevertheless, it was indeed a gate with beautifully decorated domes that have survived the Roman destruction and are still there until this day. We suggest then that Peter and John healed the lame man at the Double Gate and from there he went “walking and jumping” to the Temple as far as Solomon’s Porch.