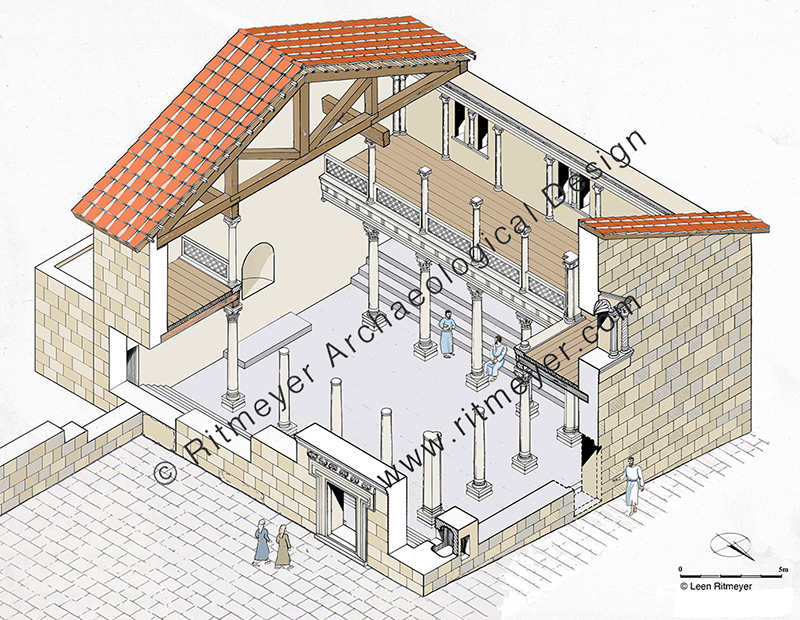 In our previous post we reported on the Arbel Fortresses and mentioned that we would describe the Arbel Synagogue in the next post.

Communal worship began in the Tabernacle and continued in the subsequent temples of Jerusalem. Synagogues emerged much later in time. Worship in synagogues was very different from that in the Temple. In the latter, cultic practice was led by a small group of priests and other officials, with the ordinary worshipers relegated to outer courtyards. In synagogues, leadership was open to all. Prayer and study replaced sacrifice, and ceremonies could be observed by everybody.

The first synagogues that were built in the Land in the 1st century, e.g. Gamla, Capernaum and Magdala, were flat-roofed and had benches built around the colonnaded interior. Later Byzantine synagogues had pitched, tiled roofs and were more elaborately decorated.

Synagogues were religious, cultural, and social centres of the Jewish community. Communal prayers and the study of the Hebrew scriptures were conducted for young students and adults, often in rooms set aside for that purpose. Whereas the main part of the synagogue, the assembly room, functioned as a meeting place with the emphasis on the Shabbat service, sacred meals were also served there, and communal law courts sat there.

The most important part of the Shabbat service was the reading of the Torah and its exposition, as noted by the author of Acts 15:21:

“For from ancient generations Moses has had in every city those who proclaim him, for he is read every Sabbath in the synagogues.”

In the fourth century, a Byzantine style synagogue was built in the centre of the settlement of Arbel, on the west side of the middle residential terrace. In 1987-’88, Zvi Ilan and Avraham Izdarechet began preservation and restoration work on the synagogue and its surroundings, and they asked me to prepare a reconstruction drawing.

Its plan recalls other Byzantine synagogues in Galilee such as Capernaum, Chorazin, Tiberias, Meroth and others. Originally, the main entrance was in the eastern wall and was partially constructed from one gigantic rock.

In the north wall of the synagogue, an installation that resembles a charity chest or community treasury has been found.

The synagogue had the shape of a basilica and was oriented north-south and measured 20 by 18.5 meters. In contrast to the village houses that were built of dark basalt, the synagogue was constructed of limestone blocks. The interior had three rows of pillars with heart-shaped pillars in the corners and four steplike benches were built along three of the walls.

A round niche for the Torah ark was later constructed in the southern wall, with a stone platform (bema) in front of it for the reading of the Torah. Such a feature was characteristic of later synagogues. There was also an additional entrance made in the middle of the north wall at this time. This new axis from north to south was designed to direct worshipers to face towards Jerusalem when they entered the synagogue through the northern entrance.

The three rows of columns on the first floor had Corinthian capitals, while those of the second story were topped by Ionic capitals. Smaller Ionic pilasters, flanking double windows, adorned the walls of the upper story.

A large, paved courtyard was made in front of the main entrance. It may have served as what is called in rabbinic literature a “door within a door”, that is a kind of entrance room or place of assembly. The building was topped by a tiled roof.

The Arbel Synagogue continued to function until the earthquake of 747 AD, when it was severely damaged, and the settlement destroyed.